CONTEXT OF THE PROJECT

Food is one of the most important needs for every human being. The upcoming food crisis is not a fiction. Today's dominant model of industrial agriculture creates dangerously fragile societies and ecosystems. It is focused on elimination of farmers, globalization of the countryside and its transformation into global food factories. Yet its accumulated negative effects causing the exhaustion of natural resources remain disconcertingly imperceptible to significant parts of society.

We need solutions that enable producing and enjoying healthier food, living in harmony with nature and its rhythm, and healing the planet so it can heal us in turn. The COVID-19 pandemic, mass migration, and the climate crisis are showing, like never before, that we have to look for new solutions as well as give voice to those that already exist. Worldwide, new initiatives that operate on the borders of the mainstream or in niches are pioneering the way to attune a new, more sensible and ecologically informed societal DNA to the biosphere of our planet.

The Supermarket Museum and Edible City Warsaw are the fruits of the intersecting collaboration between two entities: Biennale Warszawa and Agro-Perma-Lab Foundation. We propose two different reflections on how we can recover independency from big food industry and how we can develop and support urban agriculture and gardening, local food initiatives and existing farmers that appreciate regenerative and ecological principles. Small visions matter. The work of weaving our creative imaginations has the potential to redirect "growth" towards non-material,non-destructive and not profit-driven paths. Let's act on it now.

Our world is a nexus of interconnections, mutual influences and interrelations. Nothing demonstrates it more than societal relationship with food. Food is the source code for the functioning of our civilization, and food systems underpin the ongoing co-evolution of nature ecosystems and societies.

The multiple disruptions to the Holocene balance we are seeing as a a result of the 20th century growth paradigm set by global capitalism, leads us to question the fundamental meaning of food.

We are battling between the model of food as an anonymous commodity, a raw material with caloric label for global trade, versus the view of food intimately nested in our relationships with each other, with the land and our communities. The contrast between the two alternative models of feeding the growing world's population with limited resources of planet Earth could not be more stark.

On the one hand, we have the supermarket culture - the apex of the old world order in terms of food production and redistribution. With its seemingly unmatchable efficiency, the supermarket model has detracted a significant part of society from the need to cultivate the land and from the mindful stewardship over natural resources. Its destructive social, cultural, economic and ecological implications remain hard to digest. Skillfully concealing the environmental costs of industrial/chemical agriculture, the supermarket culture renders the negative effects on soil, water, and biodiversity imperceptible. As a result, the bases of our common existence remain heavily threatened, until it may be too late to deal with their consequences.

On the other hand, nearly across the whole world, new sustainable, grassroots forms of food production and redistribution are dynamically emerging. They are correlated with the nascent awareness of our place in the Earth's ecosystem. Permaculture, agroecology, urban agriculture and cooperativism, are just a few approaches, in which the interconnectedness of all beings and ecosystems is honoured. Based on ecological design principles and regenerative feedback loops, they create cultural blueprints for interconnecting anew individual and planetary health.

Small visions matter. The supermarket culture has been with us for only a few decades. It can be changed as fast as it appeared in the first place. The work of weaving together our creative imaginations is one step towards finding ecologically-informed patterns of a new societal DNA that will invert the downward environmental spiral with the principles of food solidarity at the heart. We are seeing the potential of redirecting our economies and ecologies towards non-material, non-destructive paths of "growth", towards economies of wellbeing. A tiny seed becomes the tall tree given time and tending. We may not be there to see it’s flourishing, but we can do the planting.

The supermarket food system and its social, cultural, economic and ecological implications are destructive in many ways. The system’s underlying values of profit-making do not respect local communities and cultural and biological diversity. The supermarkets go to a great length to hide the information about the origin and way of production of what they sell. They cause a hyper version of disconnection of where the products come from. What is more, the supermarket model destroys small farms and companies, monopolizes local food systems. and does not respect workers’ dignity. The long-chain industrial food production, distribution, and waste issues damage ecologies and health. What is more, the supermarket system falsifies the inevitability of technological ways of producing food and makes people fulfill their spiritual needs via consumption. The phenomena of greenwashing and sensory marketing only accelerate the problems of the supermarket culture. We know other systems, alternatives do exist [link to path 2 of the museum]. The supermarket culture has been with us only for few decades and can be changed as fast as it appeared.

Most people have been led to believe that large-scale, chemical agriculture is the only way to feed our growing population. However, the United Nations has repeatedly reported that small farmers consistently
grow 70% of the world's food supply on less than30% of the world’s agricultural resources while the remaining 30% is produced by industrial/chemical farming which consumes 70% of the resources.* After nearly 80 years of experimenting with the supermarket culture, we can see that it is not able to feed humanity in the long run. Built on the glitz of comfort, speed and cheapness, the 'convenience store' model detracted significant parts of society from the need to cultivate the land keeping imperceptible the negative effects on the exhaustion of natural resources.

The practical knowledge of food growing is largely lost in many European populations. Food is, however, the source code for the functioning of our civilization and the growing of plants and animal husbandry, have an amazing power of transformation. Fortunately, we are now seeing a whole lot of grassroots innovations in food production emerging. They are correlated with the nascent awareness of our place in the Earth's ecosystem.

The educators have various missions including empowering entire communities to create collectively a regenerative, sustainable and fair food growing system for all. Our goal is to search for the rays of light breaking through the cracking shell of the old order and by finding harmony in them, building a sensible pattern of a new societal DNA of human inscription into the biosphere of our planet. The potential ahead of us is to redirect growth towards higher, non-material, non-destructive paths.

Small visions matter. The work of weaving together creative imaginations to rise to the challenge is the tiny seed that becomes the tall tree given time and tending. We may not be there to see it’s blossom but we can do the planting. Let's begin by renewing our relationship with the soil, food and community, together with the little ones, to see the Earth, bountiful and healthy again. "We are the ones we've been waiting for".**

More information about the project can be found here. The project is co-financed by European Cultural Foundation.

If you have any questions about the project or you are interested in taking part, write to us. 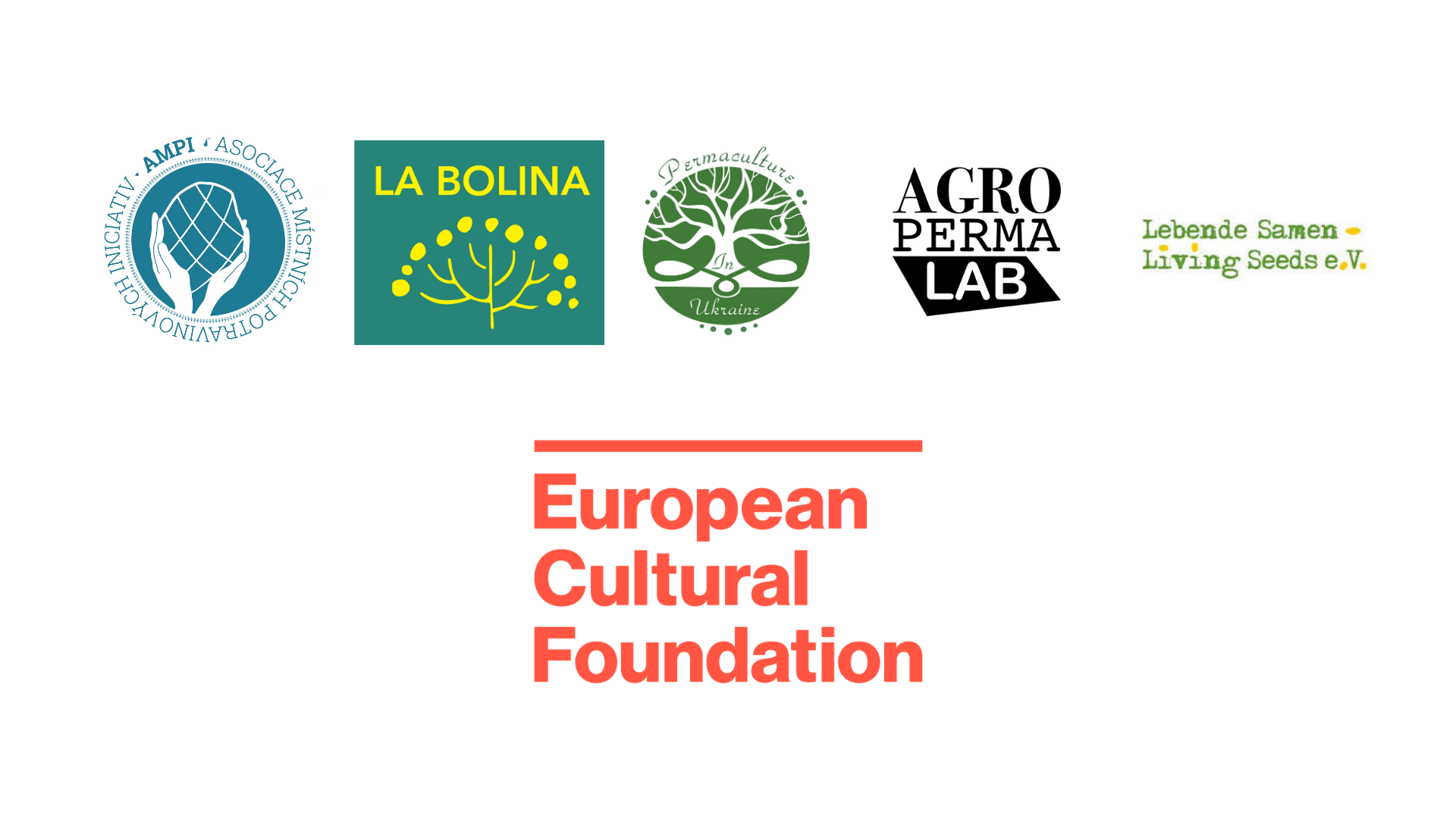